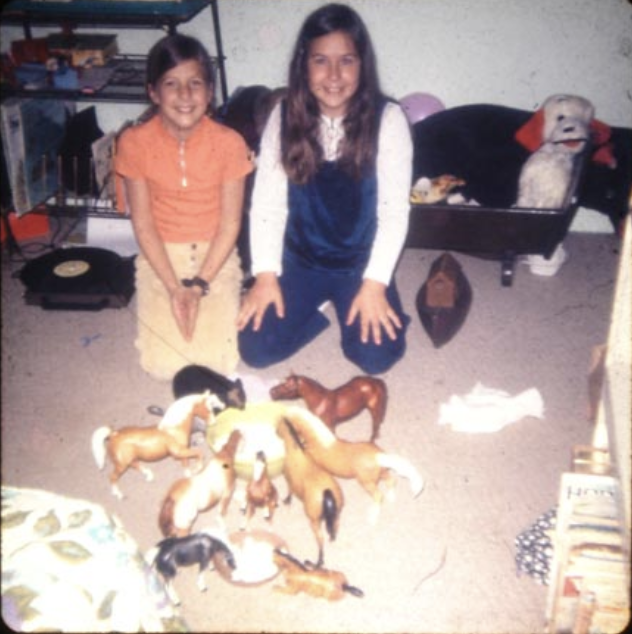 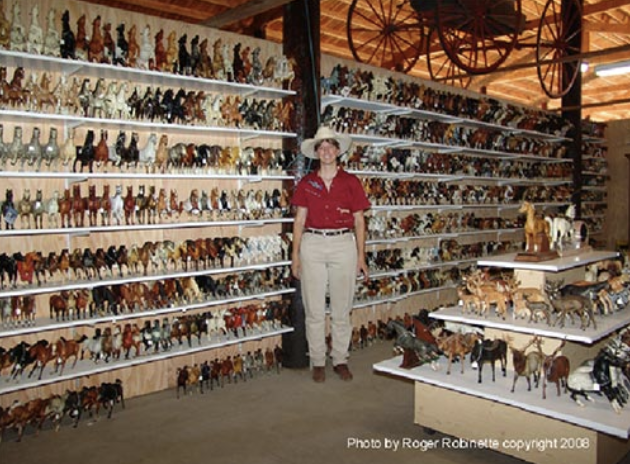 I bought my first two Breyer horses, a charcoal running stallion and a palomino fighting stallion, when I was six years old back in 1969. It was my Christmas money, and boy was I proud to bring them home! Many long hours were spent playing with my best friend Diane, who had her own collection. We would have great adventures in the wilds of my back yard, or in my bedroom when night fell. This is an early photo, before I got to pick my green shag carpet (because it looked like grass, of course!) and the horses were grazing on popcorn. I am on the left and Diane is on the right. Oh for the days of making saddle blankets on the potholder weaving loom and bridles from rubber bands and newspaper string! Many of us share the same memories, growing up a horse-loving girl!

When I bought my first 15 model horses, I never would have guessed it would affect the course of my life like it has! I started collecting again when I met the man who later became my husband, and he talked me into picking up some Breyers we saw at an antique toy show we attended together. His love of collecting toys from his childhood spurred me on to begin collecting again at the age of 19. We married five years later, and after 35+ years of wedded bliss, he became just as proud of my horse collection as I was. Who would have thought? I went on to collect Breyer, Hartland, Marx, American Character and Hagen-Renaker horses and animals and displayed the 1,500+ piece collection in my home for many years.

My first job was teaching crafts to kids at the Ontario Parks and Recreation Department in my hometown in Southern California. My degree in art, love of drawing horses and collecting models brought me to creating Horse-Power Graphics. I began my business drawing animal portraits and silk-screening my own horse designs including shirts for Jamboree and BreyerFest. Through Horse-Power Graphics, I published the Model Horse Trader model horse sales and trading magazine for 9 1/2 years.

In 1992, I began The West Coast Model Horse Collector's Jamboree as a way for collectors to come together, buy and sell from each other, and see the newest models from all horse model manufacturers. With support of my friends, plus Breyer, Hagen-Renaker, Hartland, Peter Stone and others, it grew to become the largest convention of its kind until the last show which was held in October of 2004. 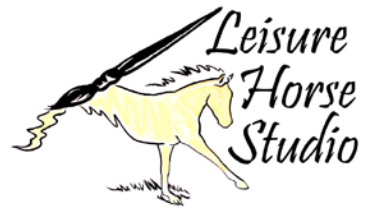 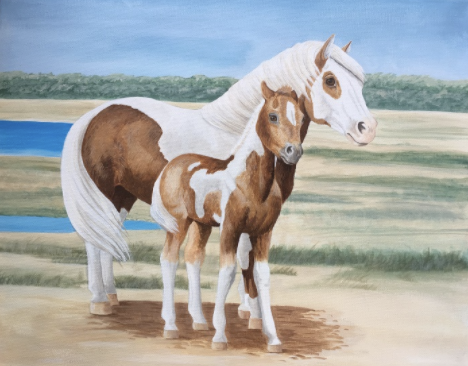 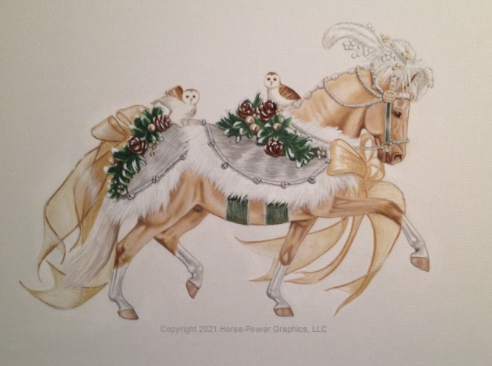 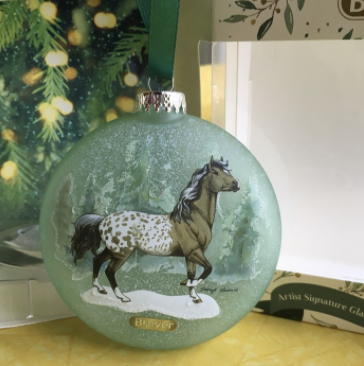 In the mid-90s, I was hired by Breyer to paint prototype models beginning back when their Big Ben model was new! I represented Breyer at Breyer Tour Events in 1999 and 2000 and in between traveling to seventeen of them, I also designed models in the New Jersey factory, produced BreyerFest in 1999 and 2000, and Jamboree too! I attend BreyerFest and Equilocity in Lexington every year. Come by and see me at the Clarion Hotel in July!

I also paint for Peter Stone Horses and have produced several Artisan Hall and Extreme Makeover runs for them plus thousands of One Of A Kind horses. My draft horse head ink drawing appeared on the Peter Stone Horse boxes for the first years of that company. I also designed the horses for Hartland Horses from 2000 on and produced their "Noble Horse" series models.

You can see examples of my pencil portraits on the first issue boxes of Breyer's Hollywood Dun It, Wahoo King, Scamper and the cutting horse and my acrylic paintings on the Breyer Coloring Book cover and on the 2010, 2014, 2016, 2017, 2020, 2021 and current 2022 Breyer Signature Series Christmas ornaments. I also paint portraits of Breyer models to be made into articles of clothing and backpacks for Breyer.

I sculpted my first model horses during those early years of Jamboree, and have produced two sculptures overseas (the Walter/Change of Hart stock horses and the Thor/Bravehart Friesian) and four hobby resin editions. You can see them on my Equine Artwork page. I have been painting professionally since the age of 15 and presently specialize in creating custom painted and sculpted horse models that are consistent winners from local model horse competitions up to the National Level. I'm especially known for my Appaloosa and dapple techniques. I am occasionally accepting custom orders.

This is a photo of me with my cute little Paint mare Tootie in her pasture in Mariposa. We now live in Indiana in a little town called Kimmel. We have a wonderful 5-acre farm with a lovely 100+ year old farm house, plus old barns and even a silo! I keep myself quite busy with all of these activities, and enjoy my life in the MidWest with my husband, my two children and all my critters. Let me know if you would like me to create that next special piece of equine art for you! 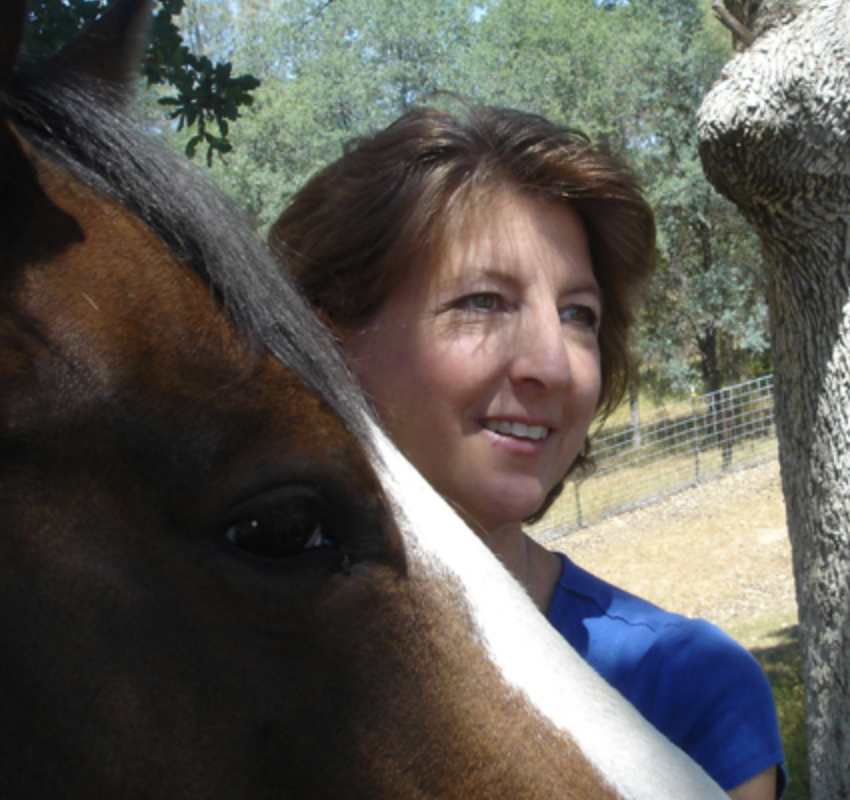